Out of all of the states that we’ve visited in New England, Vermont ranks among our favorites. With snow covered mountain tops, wide pastures, and quaint little towns that overwhelm you with their cuteness, it’s not hard to see why. Over the weekend we took our 4th trip to the Green Mountain State and enjoyed ourselves much more than our last trip. 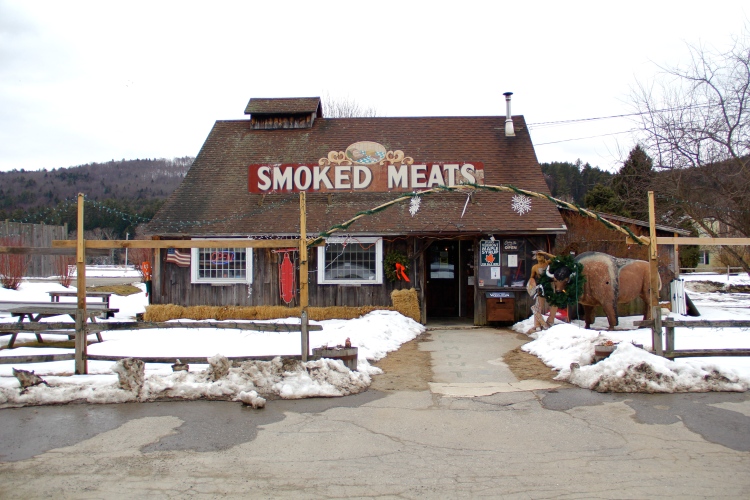 We enjoyed our time on Saturday afternoon popping into random farm side shops, wandering around the downtown square, and perusing through stacks of antique goodies in the local thrift shops. We sampled lots of cheese and maple syrup, and sipped on coffee from a nearby bookstore. We took the day slow and set a leisurely pace. If only more days could be spent that way.

As the sun began to set and the snow started to fall, we headed for the cabin to savor an evening with friends. We enjoyed a meal of homemade spaghetti and meatballs (which was impressively made by the men of the trip), played several rounds of cards, and delighted in toasty beverages to help keep us warm.

Waking up early Sunday morning to fresh falling snow, we set off to hit the slopes for a day full of snowboarding.

You’ll recall that  one of my goals for the year is to learn how to snowboard. I can ski with the best of them, but snowboarding is a new task for me. After several trips and much time spent on my face, I was close to giving up. I wasn’t having much fun coming home covered in bruises and too sore to move. It wasn’t until this weekend that I saw the glory in snowboarding. It’s amazing what fresh powder can do for you. Not only did it make things SO much easier, but my confidence shot through the roof as I was no longer as afraid to fall. When I did fall (which wasn’t near as often as before) it felt as I was falling on pillows as opposed to cement. Learning to snowboard on ice and fake snow is no fun, people! If the conditions would have been this great on past trips, I feel as I could be a pro by now!

We ended our evening among friends, good food, and one last round of cards before our drive back to Boston. Though just a short trip, a trip like this was just what I needed. It’s good to get away every now and then, slow down the pace, and live life for the moment.

What did you do last weekend? Do you have a favorite place to go for a quick weekend escape?