Last night we locked the door to #20 one last time. We stood and stared at the empty space, reflecting on the moments shared in our sweet little home. Closing my eyes, I saw an apartment filled with beautiful memories. Maybe it’s because I’ve never moved much before, or maybe it’s because of the things that happened there, but I had an awfully hard time saying goodbye.

Two years ago, I didn’t know what to think of this city. Life here was not what I was used to. It was foreign, and hard, and I was ready to go home. Then suddenly, one day, Boston became home. It became the place that I loved to live. The lifestyle here was no longer foreign to me, but instead, exhilarating (though often frustrating). The idea of ever leaving was not one I was excited about.

But now, that time has come. We’ve said most of our goodbyes and have sent our belongings on their way. Tonight, we board a plane for Europe, and in August, we will say goodbye to Boston one last time.

Before leaving, I had hopes to whip up lots of amazing European inspired meals and share the recipes with you. I planned to enlighten you with the wonderful history behind some of these foods. I planned to take you along in our travels by connecting you through food.

Now, here it is, months later, and the time for our trip has finally come. 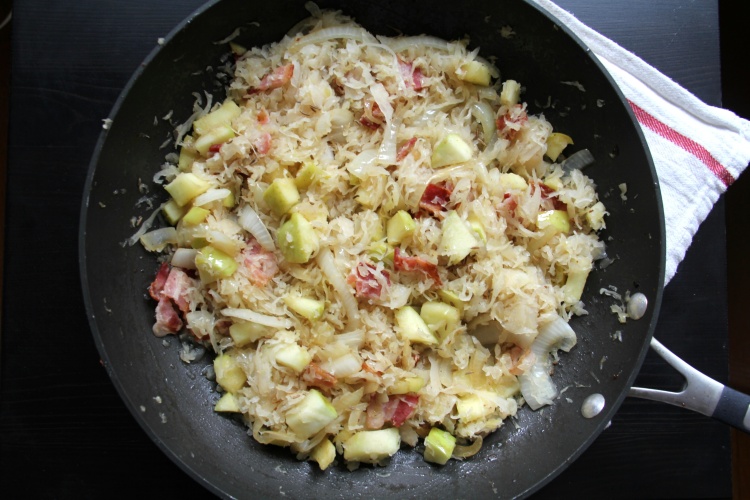 This recipe is credited to our dear friend Sam. I’ve likely changed it a bit from the original, but then again, I don’t think Sam has ever cooked it the same way twice.

Sauerkraut originated in China over 2000 years ago, but it wasn’t until 1000 years later that it appeared in Germany. Before trying this recipe, I never knew sauerkraut to be much more than pickled cabbage. Though this recipe is great on its own, I still favor it with a hearty sausage and tasty doppelbock.

My posts may be few and far between these next few weeks, but I promise to post pictures and updates along the way. For now, here’s a German inspired recipe for you to enjoy. Prost!

In a large skillet over medium heat, fry your bacon until just crisp. Set aside and crumble, reserving bacon grease.

Sauté onion in bacon grease until tender, about 5-7 minutes. Add apple and stir.